Are you craving a more meaningful life? Wanting to live more Intentionally? Looking to experience transformation? Reconnect with yourself?

My life story coming up, so grab a cup of tea and get comfy!

I had an arranged marriage in 2002 which lasted 1.5 years, during that time; I got pregnant and got divorced before I had my baby. Since the birth of my daughter, he never gave his consent for her to have a passport. After 7 years, the Norwegian passport office couldn’t get hold of him so they issued my daughter a passport which meant a big deal to us. Without a passport, she was not able to travel to Norway or anywhere else to see her family.

My mother got ovarian cancer in 1995, had major surgery and was well until 2004 when cancer came back. To take care of her; I quit my full-time job and started working from home. My mother struggled with cancer for 3 years until she passed away in 2007. Our family fell apart, my father got re-married and my brothers moved abroad.

6 months later I decided to move on with my life and focus on me and my daughter – so we moved to London in July 2008. We moved out of the blue, without having any family or friends, but this was a risk I was willing to take.

Our life in London started not as I had planned and hoped for, I got a job offer as Interior Designer before I moved to London, but sadly by the time I could start working full-time, the company shut down due to recession.

For a year and a half, I had no money and no help. I was in debt and really struggling. My landlord was very understanding and let us stay even though I owed him money. I didn’t know who to turn to and ask for advice, then I found out about The Citizen Advice Bureau through the Children’s Centre at my daughter’s school. They advised that I was entitled to certain benefits and that I needed to get my National Insurance number and sign-up with the Job Centre.

During this time I got attacked on my way to pick up my daughter from school, I was grabbed from behind, I started screaming and he ran away. I was so scared but picked up my baby and went home. After this incident, I didn’t leave the house for a week, didn’t even send my baby to school. I eventually mentioned what had happened to one of the staff members at the Children’s Centre who advised me to report the attack to the police – which I did.

A couple of months later, I started getting housing and job seekers while I was actively looking for a job. Sadly because I was Norwegian and didn’t have any experience in the UK, getting a job was far from easy – I kept getting told I was over-qualified. I then decided to do a teaching qualification through the jobcentre at the local college. This was an intense 1-month course where I went to college every day from 9-5 and my daughter would be at school from 7.30 am to 6 pm (breakfast club, school and after-school club). I barely spent any time with my baby which caused her to get night terrors. For the first couple of days, I didn’t understand what was happening to her, so I booked an appointment with the GP who then said that due to sudden changes in our lifestyle had caused her to have night terrors and that it will ‘go away’ by itself – it can take from months to years.

I finished my teaching qualification without any problem whatsoever, I then joined Housing Catalyst who helped single parents get back to work. In September 2009 I went to Paris to attend Maison & Objet. On the way to Paris, I got this magazine from Boots. In there I found a very touching article about 2 sisters who had lost their mom to cancer, they then contacted The Eve Appeal and became their supporters. This article inspired me to do the same; I had lost my mom to cancer and wanted to support the cause. I had a meeting with them, did some training and became their Regional Ovarian Cancer Coordinator.

While job searching, I launched two blogs; Vivacious Mums – Support and Empowerment for Single Mums and My Unique Home – Creating beautiful, healthy & happy homes. These two blogs kept my passions going and the best part was that I could work on them around my daughter. During this time, I joined Gingerbread and started running a local support group for single parents.

In Autumn 2011, I got a restaurant design project in Uxbridge who then hired me part-time as their Office Manager to handle their PR & Marketing and Events. At the same time, I got a job at Ealing Adult Learning and Hillingdon Adult & Community Learning as Interior Design Tutor.

In July 2012, I was shortlisted for the Woman Survivor of the Year Award for the 2012 Empowering Women Awards and in November I was invited to the Award Ceremony at Claridge’s as the 1st runner-up – my biggest achievement.

Everything was fine until I was made redundant in December 2012; I then started my own business as an interior designer and run design classes at the local art centre. My daughter suggested we open our online boutique which we did.

In March 2013, my daughter and I went to a playground near our house and were both hit by a car on our way back home. I blacked out and saw my life flashing before my eyes. When I was on the ground, my daughter thought I was dead and started crying. Once I came to my senses a few minutes later, I had a go at the driver who was still sitting inside his car. Thank God there were no serious injuries, but we both were bruised, my daughter’s lip got cut when she fell; the police and ambulance were both called on the scene. The man who hit us with his car ran away – so that’s it. Case closed. Things like these make you appreciate life more.

After all this, I got the biggest opportunity – the highlight of my Design career, to do a 4-day seminar on ‘How to be your own Interior Designer’ at The National Homebuilding & Renovating Show at NEC Birmingham in March 2013.

In April 2013 I got a job at a local College as PA to the Marketing Director and teaching Panjabi to primary school children. Here I worked for 1.5 years until I was let go by a text message in June 2015.

I went back to being self-employed, my blogs had started generating income so I launched another one called Passion for Food – the inspiration behind this was to get Khushi into cooking – this resulted in her being on Junior Bake Off.
I launched my Life, Mindfulness & Wellness Coaching practice in March 2015 and this is what I now do full-time.

Live a Well-Designed Life · My interview with Colourful Radio

My point with all this is;

“Life stops for no one, and neither should you! Life is full of ups and downs; embrace and fully live the good times and learn from the bad times.”

Being a single parent can be daunting and frustrating, and can have major effects on your confidence and other aspects of life. In 2010 I did a parenting course and graduated, what I learned from that course are things that I would never think of, like the way I was raised – see the good and bad in it, explain ‘why’ to my daughter instead of ‘because I said so’ and so on. I am not perfect – no one is, but I try my best every day. I can’t afford to give up or lose my heart; my daughter is looking down at me (because she’s a head taller than me!) and has me as her role model. Every step I take, every move I make – I need to think at least twice re the consequences. They won’t only affect me but also Khushi. 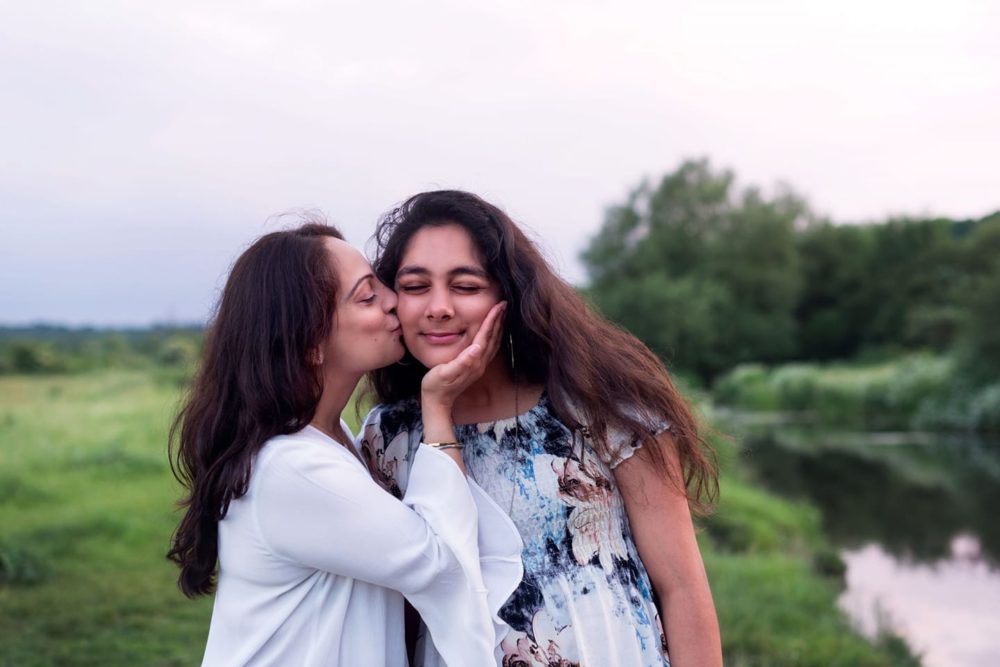 I’ve been very blessed to have a few, but very good friends who are like my family who has supported me and been there for me.

After years of hard work and a ‘no giving up’ attitude, I can finally see the light. We are now finally settled. My Dad always used to say ‘Never give up, work hard and it will pay off one day’. This is so true! Every day is a chance to start again. I’ve been lucky to get to start my life all over again with clean sheets. I don’t regret my choices. The biggest sacrifice has been leaving my loved ones, but it had to be done.

Now; 10 years later I have won 12 National and International Awards, numerous nominations and countless media appearances. Not only this; my 15-year-old daughter is an Award Winning Blogger, Junior Bake Off Contestant, Ambassador for ‘Dream, Girl’ and more.

My biggest lesson has been to keep going even if you feel like quitting and my quote is;

My scars, my grey hair, my wrinkles – they’re all a part of me and tells a story. It’s a proof of that I have lived. The only things I regret in my life, are the chances I never took. And not because I couldn’t, but because I believed in my self-limiting, negative beliefs that weren’t even my own. You cannot please everyone, but make sure you please yourself and make yourself a priority in your own life ♡ . . . https://www.designthelifestyleyoudesire.com/my-story/ . . #inspiration #motivation #empowerment #PersonalDevelopment #Lifestyle #Abundance #DesignTheLifestyleYouDesire #growth #reflection #LifeCoach #gratitude #selflove #selfworth #success #mindset #goalsetting #selfgrowth #dailyinspiration #personalgrowth #BlissfulForties #Over40 #40s #TheMindfulLife #livebeautifully #theeverydayproject #liveauthentic

A post shared by Kiran Singh ~ Lifestyle Coach (@designthelifestyleyoudesire) on Oct 10, 2018 at 2:56am PDT

My mother always told me to find something to enjoy each day – especially on those hectic, stressful days when everything seems to be going wrong. She made the little things matter, allowing a good conversation, a delicious bowl of soup or great weather to turn a whole day around. She’s also a big believer in putting everything you have into whatever you’re involved in. ‘Do things all out,’ she says. ‘It’s more enjoyable, and it’s also the way to succeed.’ She’s followed her own advice and so have I.

“Please let my story inspire yours.”